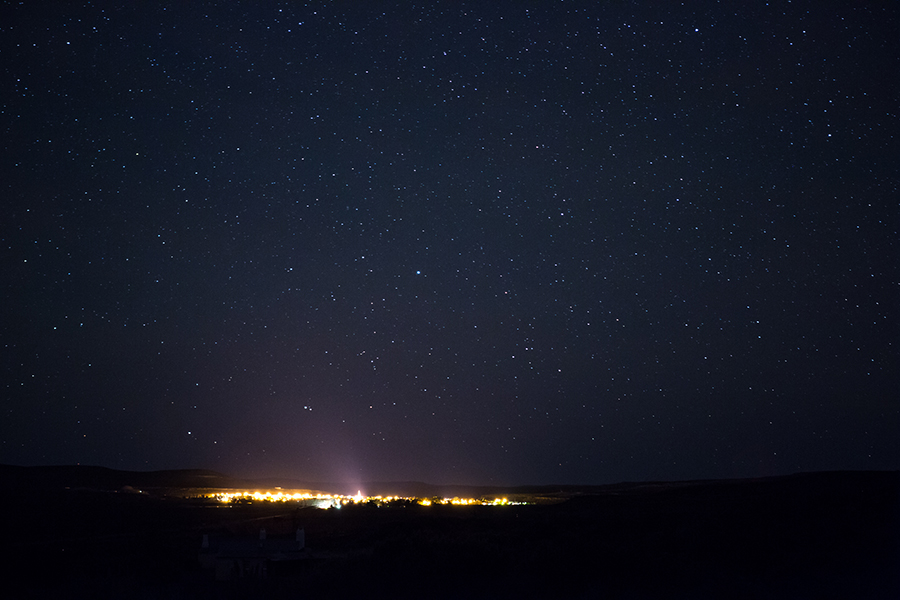 In the middle of nowhere, under dark starry skies nestled in the dramatic Karoo landscapes of South Africa lies Sutherland, the small town that S.A.L.T (the Southern African Large Telescope) calls home.

Twelve hours and 1327km later I arrived at Rooikloof Guest farm. I left Joburg at 3am to ensure I  had some time to set up my gear before nightfall. My only prerequisite was that my accommodation had electricity. I wanted to set up my gear close to where I stayed so that I can leave it out over the 4 nights to image. 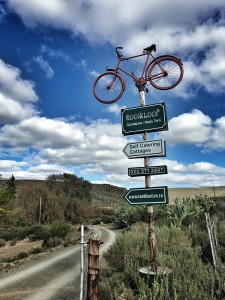 What made me fall in love with this town wasn’t only a dark sky and the picturesque setting, but how everything revolved around astronomy. I found stars everywhere, in and around the house, in town and at local restaurants (with eateries named “Jupiter” and the likes, you know you’re in the right place).

The guest farm is located 2km out of town, and everything I hoped it would be. Dark, isolated and quiet. So quiet – that I was the only person on the farm for 2 of my nights. A little intimidating for a city girl on her own, in the semi-desert in complete darkness.

Gear offloaded, set up and ready to go within an hour of arriving. I took with my 2 OTAs, Celestron 11”SCT and my Officina Stellare HiperAPO105. My preference is always setting up the 11” 1st as higher magnification betters polar alignment. And well – I have a long list of targets to work through that included some galaxies. 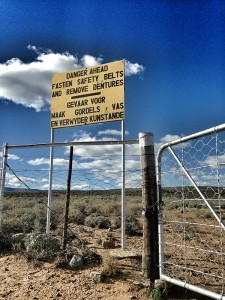 My first night presented endless problems with the 11”. I couldn’t get my guiding working 100% therefore leaving me limited to shorter exposures of 60/90sec before trailing. Even re-polar aligning didn’t yield better results. The dew was coming (surprisingly) and my dew shield made from neoprine was bent in all the wrong ways from the drive down. After losing track of time, and the onset of fuzzball stars – checking the front end of my scope and the frost on my camera case made me switch to the APO. With a fitted carbon fiber dew shield, I was happy to carry on imaging all night with the APO. And that’s how it remained for all the nights following, bar the wide field 24mm and fisheye lens milky way photos.

As I type this, a month later, I’ve not precessed all my data collected but have included what’s finished to the list below. 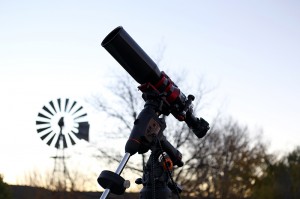 This was my first dark site astrophotography trip (successful one anyway). Looking back I realise I was target hungry, trying to extend the quantity of photos in my portfolio, not really focussing enough on quality. I shot 13 DSO targets, and many night photos. Lesson learnt; next time stay on a target longer. My DSOs average in data of 1-2 hours. Not more. 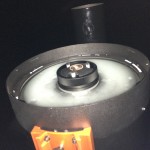 DIY a dew shield for the guide scope.
My APO uses a cheap Orion Mini 50mm guide scope. Since imaging with the C11 wasn’t a concern anymore, and I was hooked on my APO – everything must be sacrificed to make things work. The C11’s neoprine dew shield was cut up and taped onto the Orion guide scope. 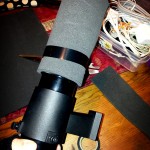 This is a location I’ll always revisit, simply put – it works well. With pristine clear and dark skies, cold temperatures, imaging is a pleasure. The town echoes my feelings about looking up and appreciates the sky they have. 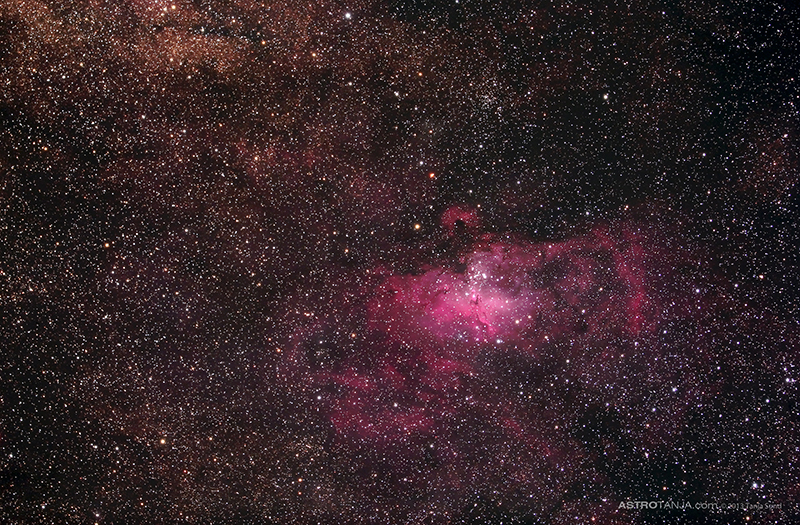 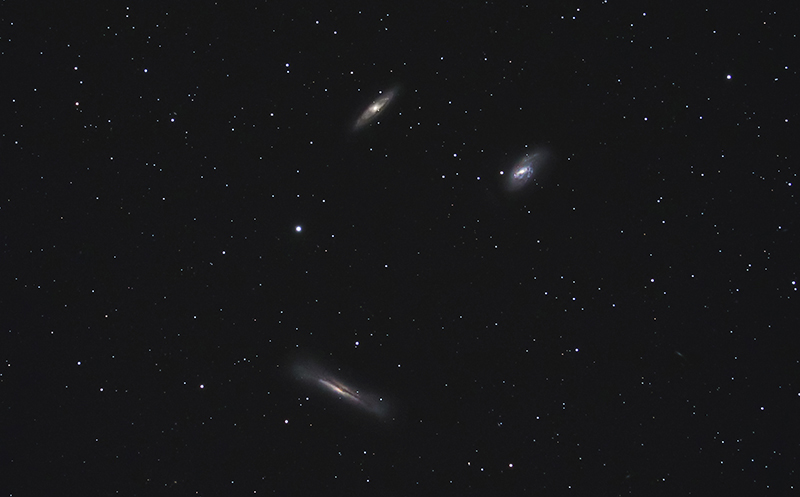 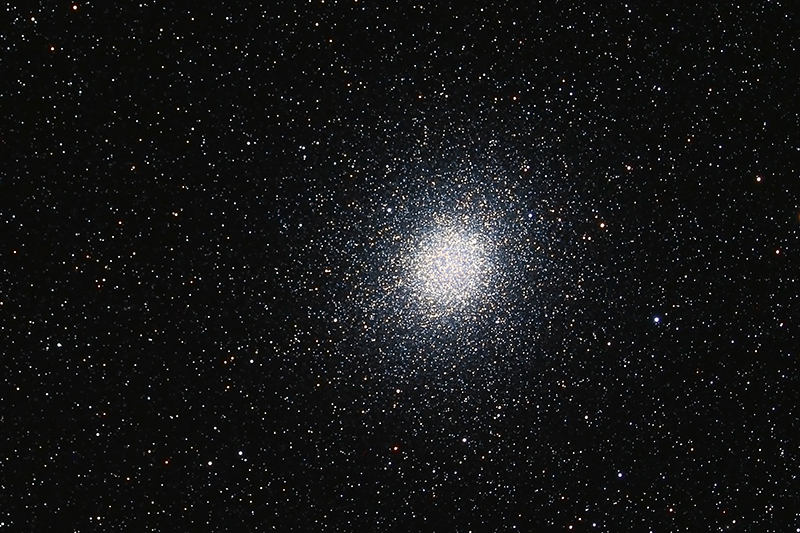 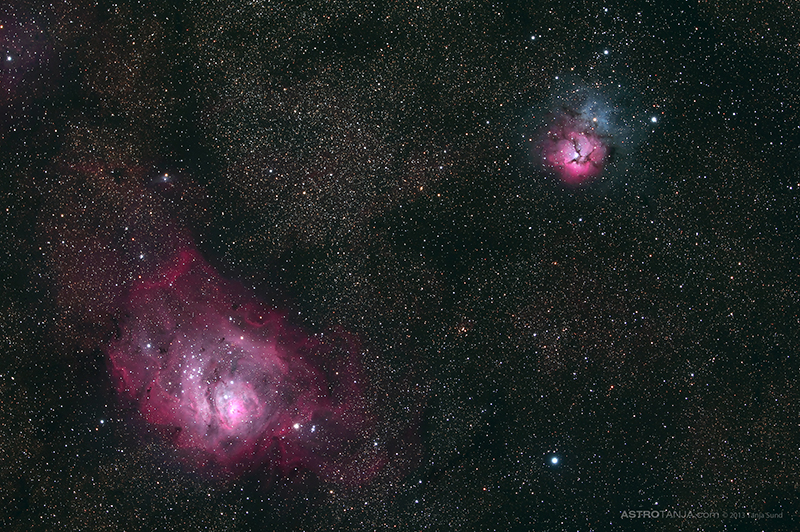 M20 and M8. Trifid and Lagoon Nebula (21x180sec iso800)
This is one of my favourite DSOs shot. I did a further 15x 120sec iso800 exposures in case I was over-exposing M20 center, but never ended up using it. I plan on a mosaic of this region to include a few more targets.
Click here for full version on Flickr 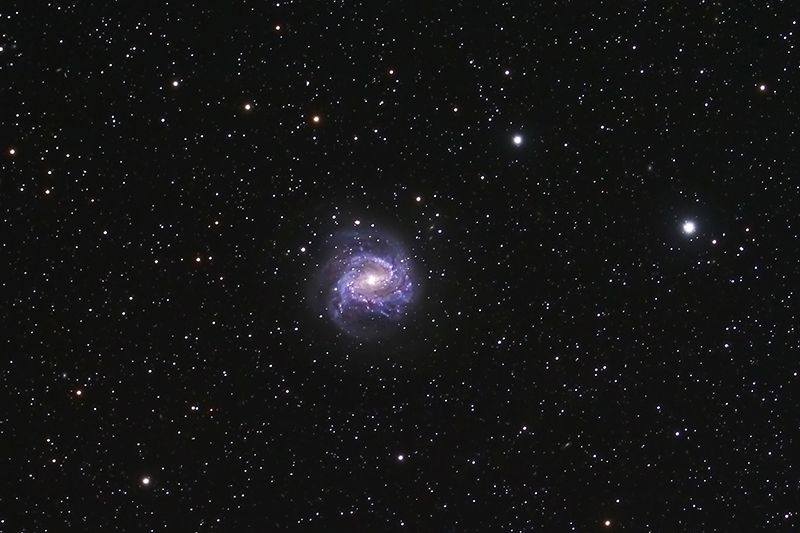 M83 1hour (20x180sec iso1600) APO and 6min C11
Imaged this the 1st night with the C11, but due to not perfectly round stars most of the subs weren’t usable. I love the wider FOV in the APO, even if it loses detail being so small.
Click here for full version on Flickr 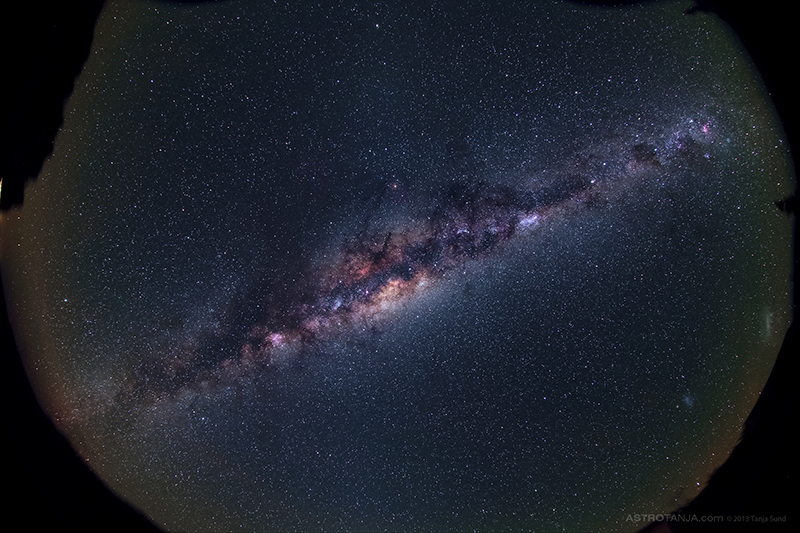 Milky Way overhead. Fisheye lens. 10Min (5×120 sec iso800)
Early morning (2am) Sagittarius was overhead. How could I pass up the opportunity to capture this view as a complete 180 view. My preference was to use the bigger sensor of the 5Dmiii but I don’t have software on my Mac to shoot the 5D tethered. So I ended up using the 60Da controlled via Nebulosity for the bulb exposures.
(I prefer shooting straight to Mac using Fits files if I know I’ll be stacking images)
Click here for full version on Flickr 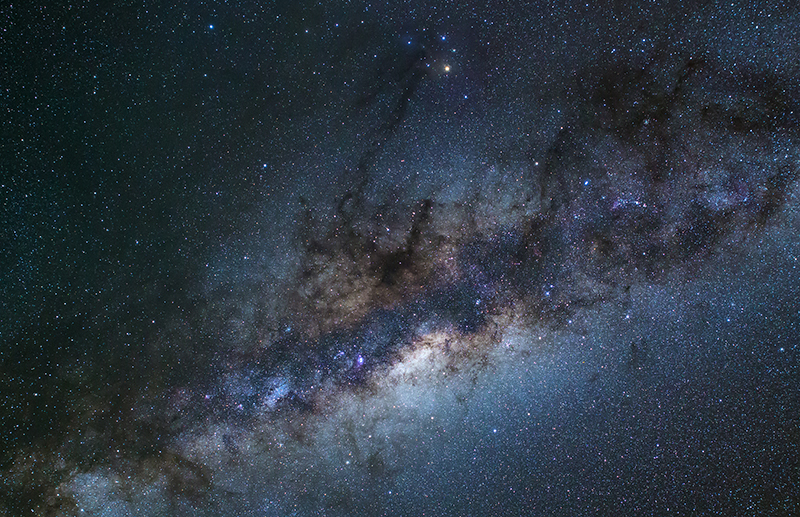 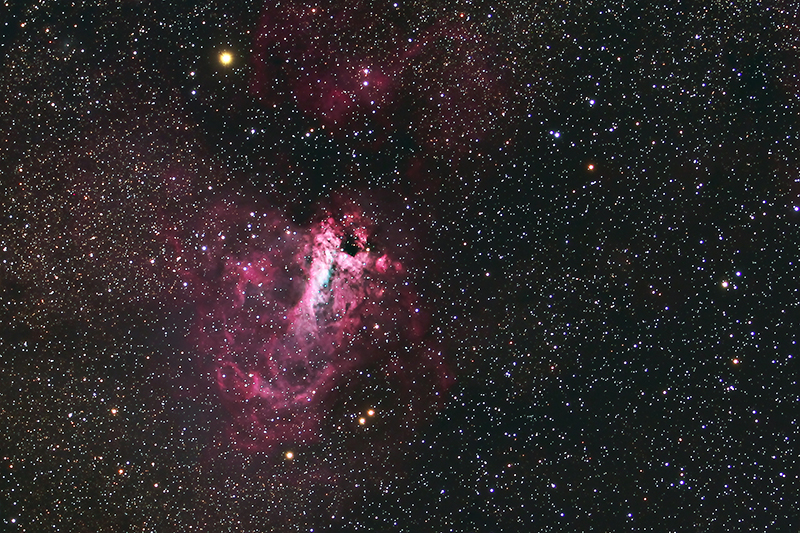 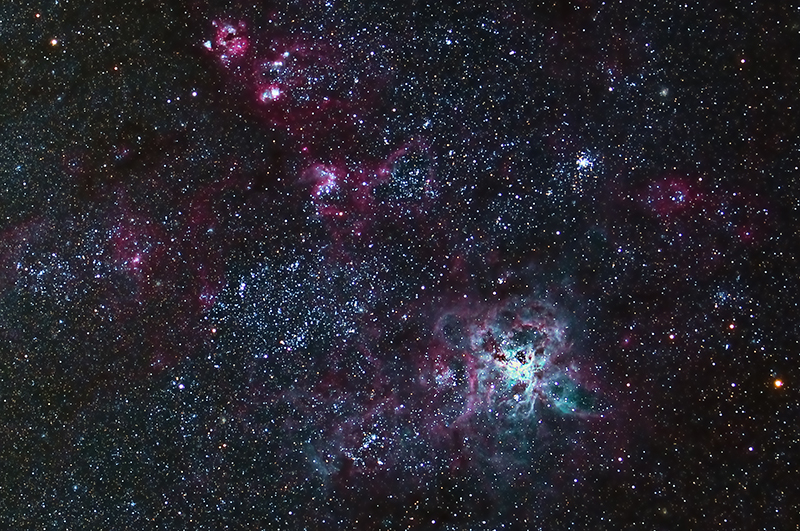 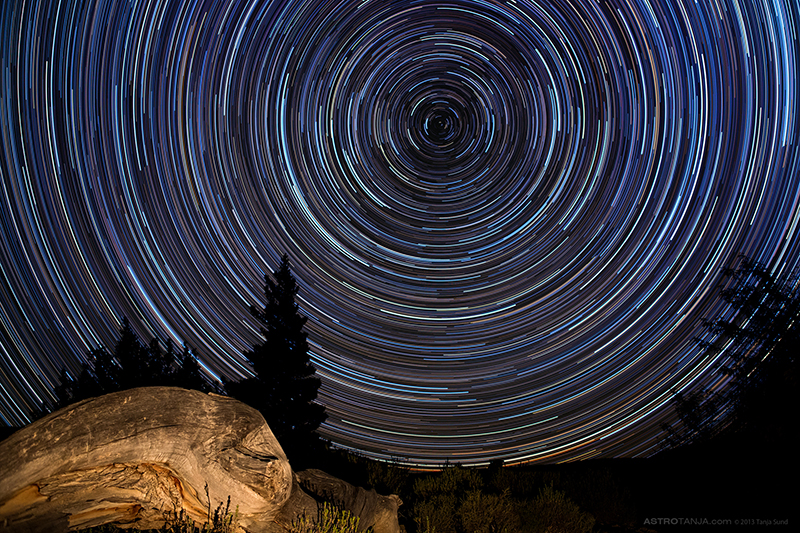 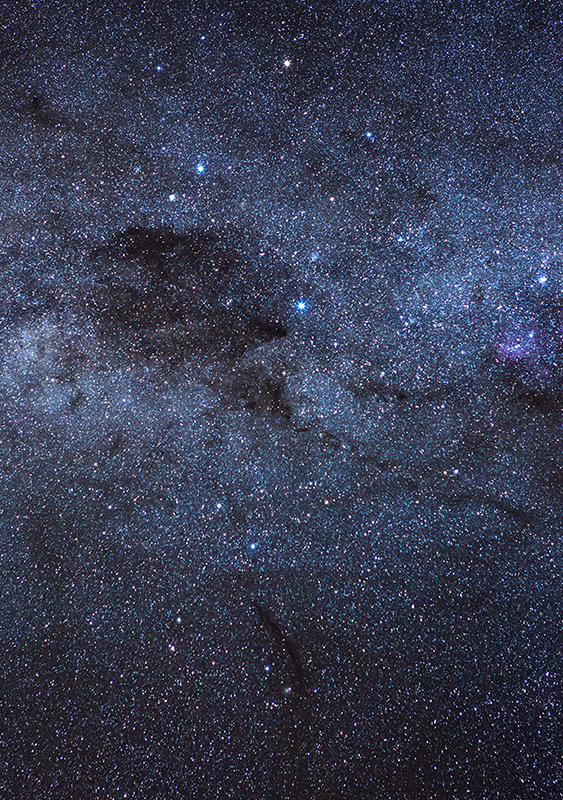 The Coal Sack
I was surprised at the lack of good images on the internet of the Coal Sack. This was only a single exposure. I am determined to re-image this.
24-70mm Canon f/2.8 II USM (at 70mm)
1 single 240sec exposure ISO 1600
Click here for full version on Flickr 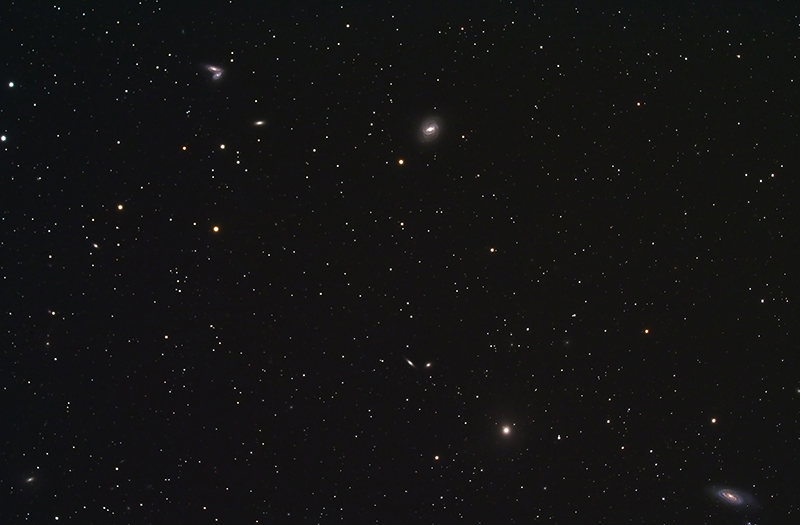 M13 9min 9×60 sec iso 1600
– This target was quite low for my location, I kept the exposures short as it was also located over the town for some LP. It wasn’t on my imaging list but I wanted to get good enough data to do a M13 VS omega Centauri comparison.  Click here for the comparison on Flickr