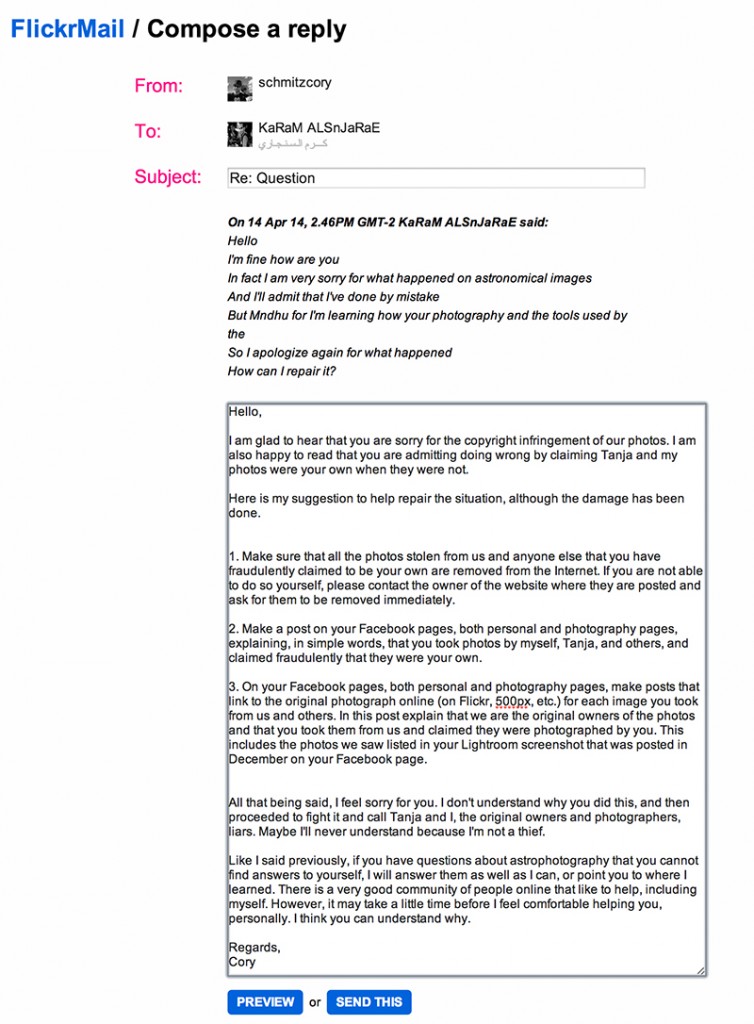 Cory and I are amateur astrophotographers, very proud of the works we produce. We put a lot of time, money and great effort into the photos we take. It was brought to our attention that a gentleman based in Iraq, Karam Al Snjarae, has been stealing our photos and posting them as his own. He posts these images on Flickr, 500PX and various other social media sites, and is now claiming that WE have stolen his images.

Naturally we’re very upset. It’s one thing to repost with no credit – but to steal, alter by cutting off our signatures, repost with HIS signature on them and sell prints… That’s copyright infringement.

Here follows simple examples of his poor attempt to fool the public.

It saddens me that he takes advantage of users lack of knowledge on photographing and editing targets like these. To general photographers, he can find ways to justify these as his own works, but I’m hoping to serve internet justice by highlighting the “astronomical” mistakes he’s made.

Simply put:
– He has none of the original photos in high resolution. WE HAVE.
– He won’t have any RAW files containing the EXIF data. WE DO.
– Nobody is questioning him as general photographers don’t normally know astronomical objects. He’s made monumental errors, and posts wrong acquisition data with images. He’s removed stars & galaxies.
– Looking at our past images and experience, speaks volumes. He’s stolen images from the wrong couple…
– All his image post dates are AFTER ours have been posted.
– He’s murdered our data with his poor editing skills

Here follows a few examples. There’s more, but this should suffice to expose him. 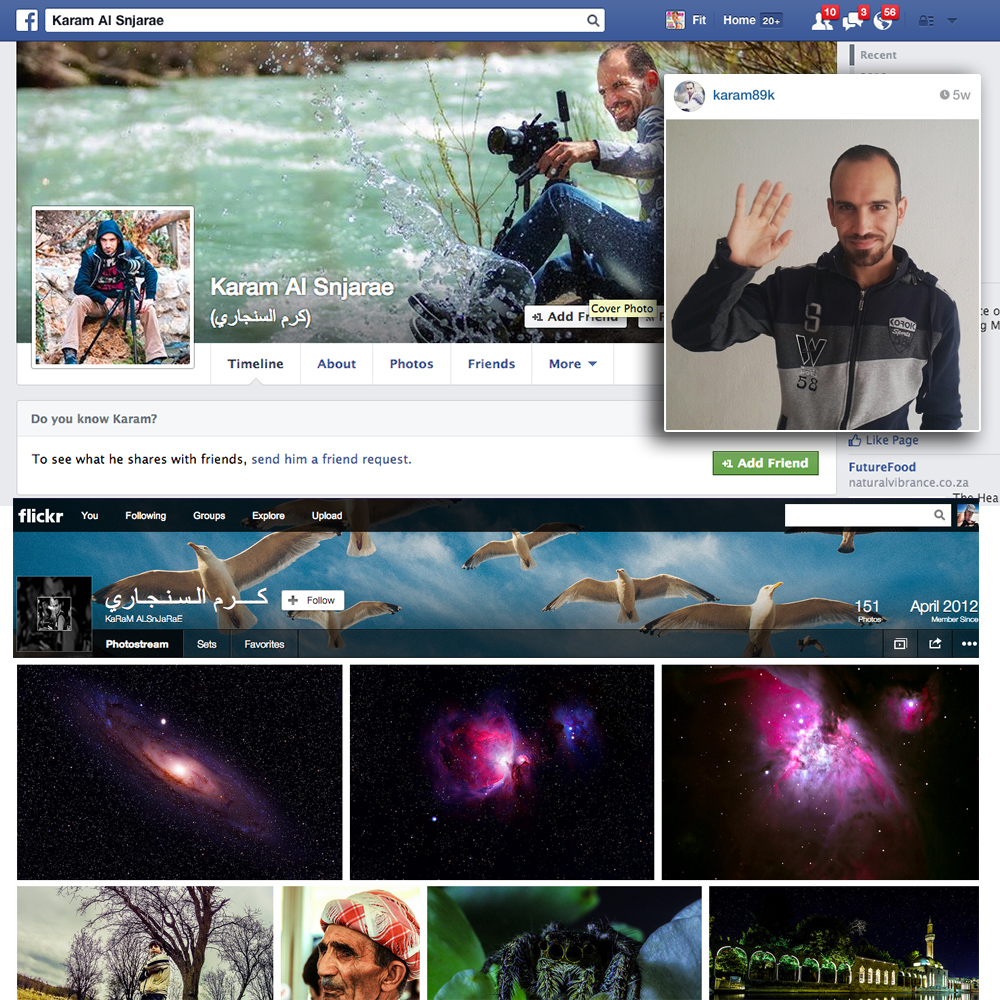 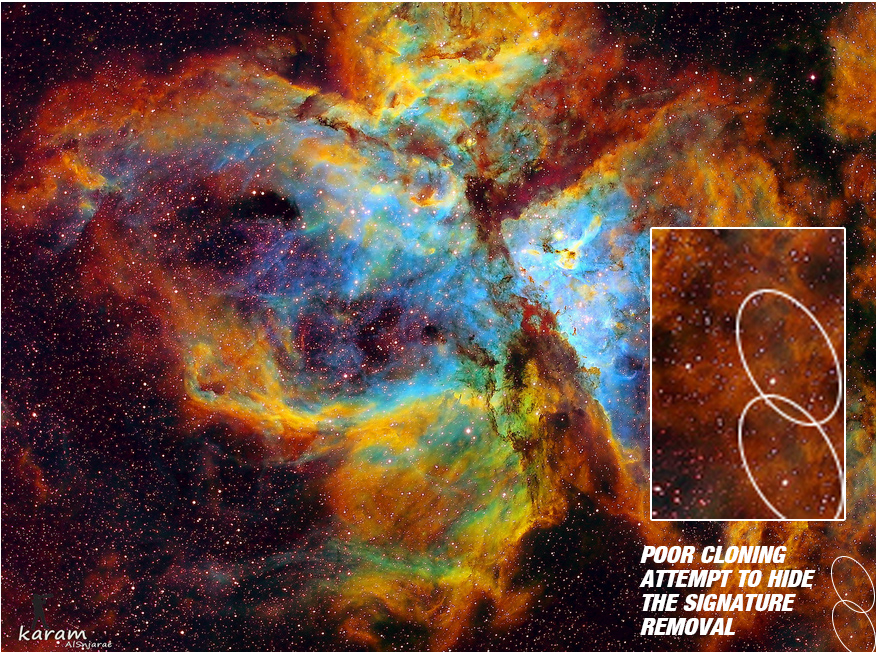 Karam has publicly stated that he photographed this from Iraq. This is impossible. The Carina nebula is a target exclusive to the southern hemisphere or near. It’s impossible to photograph it from Northern Iraq as it never rises above the horizon. (http://en.wikipedia.org/wiki/Carina_Nebula)

This can be verified using Stellarium or any other sky charting software.
– Zooming in – It shows poor cloning of the section where the original watermark has been removed.
– The colour channels are incorrect, this was our image shot in Narrowband – not RGB.
– He posted a YouTube video in the attempt to pass this as his own, to show how he registered and aligned it in DSS. A closer look reveals he’s working with Jpegs. It requires effort and time on his behalf, but he can simply take 1 stolen jpeg from our Flickr page – separate the channels in Photoshop, duplicate and “fake align and combine” them in DSS. He’s putting real time into trying to prove this image as his. Here’s his YouTube video: https://www.youtube.com/watch?v=5WKxoeZ-7XA

PITY…. it’s impossible to photograph this target from Iraq.

This one hit hard…I traveled many miles and spent a lot of money to travel to the USA to photograph this target. He just stole it – even made minor changes in the description but it still reads as mine.
(We’ve included URLs and Screen shots. I fear that he might alter descriptions after this post is released – however these screen shots will remain) 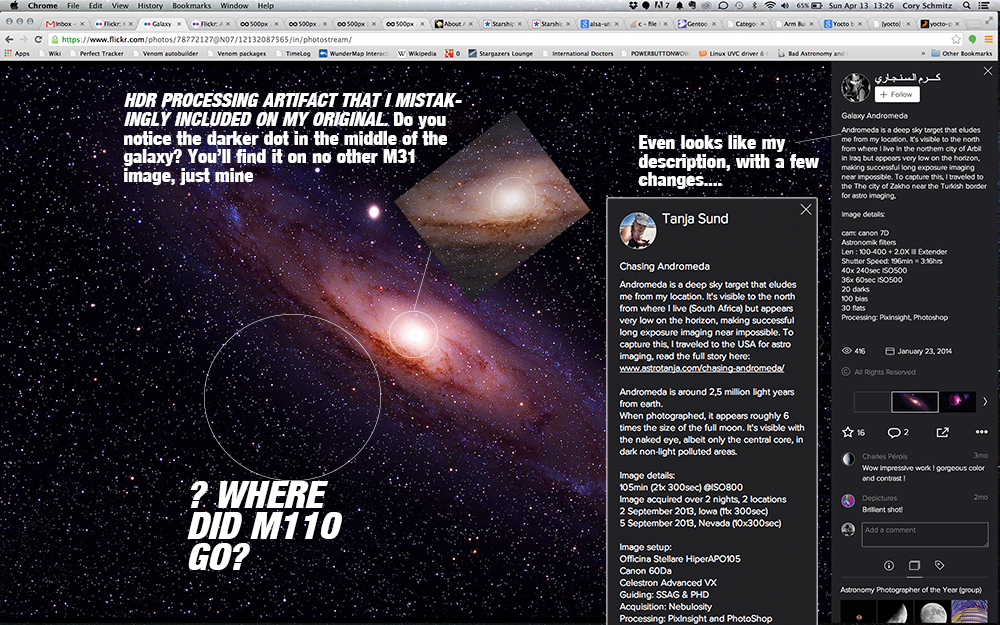 – My M31 contained an artifact caused by the HDR process I used. It’s a mistake on my part – it’s in no other image online but mine. His contains it too. Look at the center of the galaxy, there is a slightly darker spot.
– BIG ERROR! Astronomical error. He deleted M110, the companion galaxy to M31. Want to verify it should be there, google it. http://en.wikipedia.org/wiki/Andromeda_Galaxy
– He’s posted a more incorrect version. Highlighted below.
– He even submitted this image to NatGeo.
– In stealing my description “It’s really low on the horizon from where I live…” yes, douche bag, where I live in South Africa – where you live in Iraq, it’s at zenith… (which means overhead. See, he knows nothing of the night sky and where these objects really are) 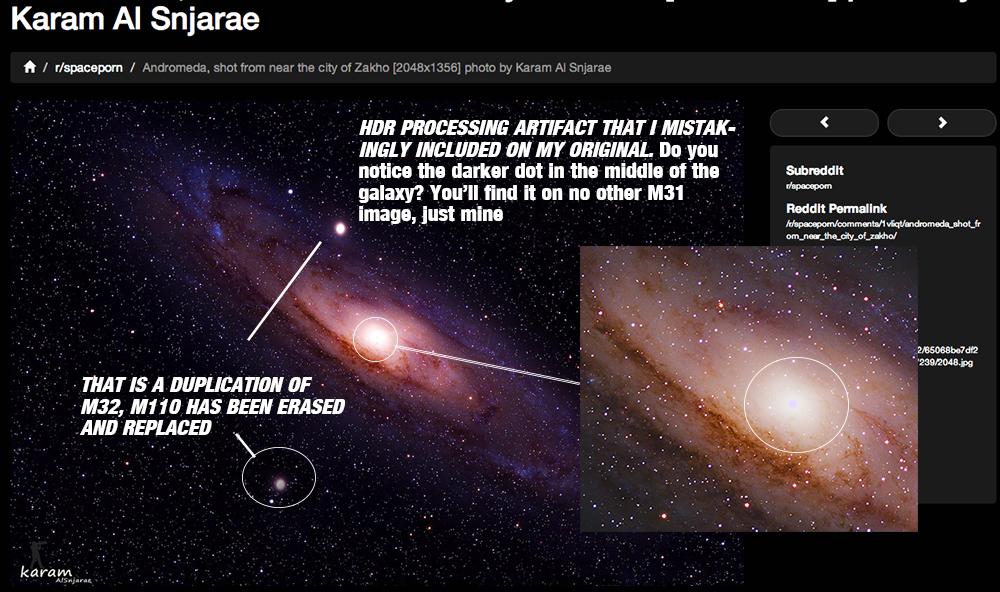 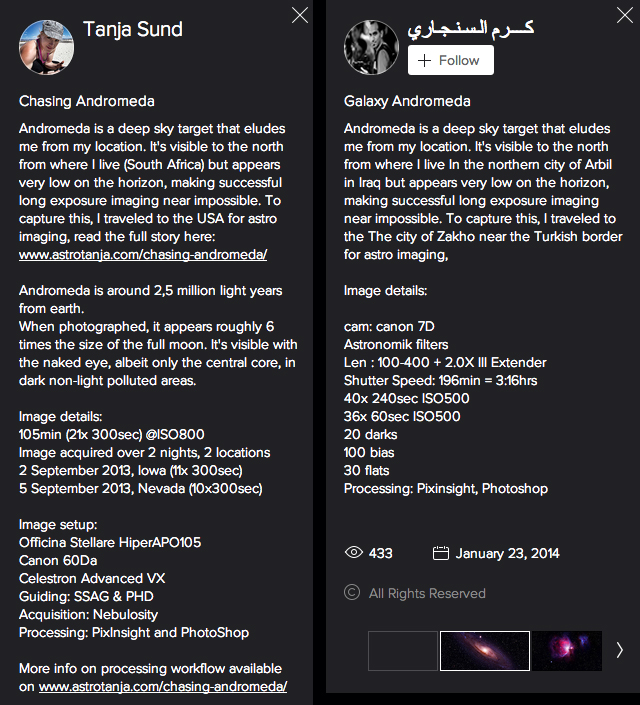 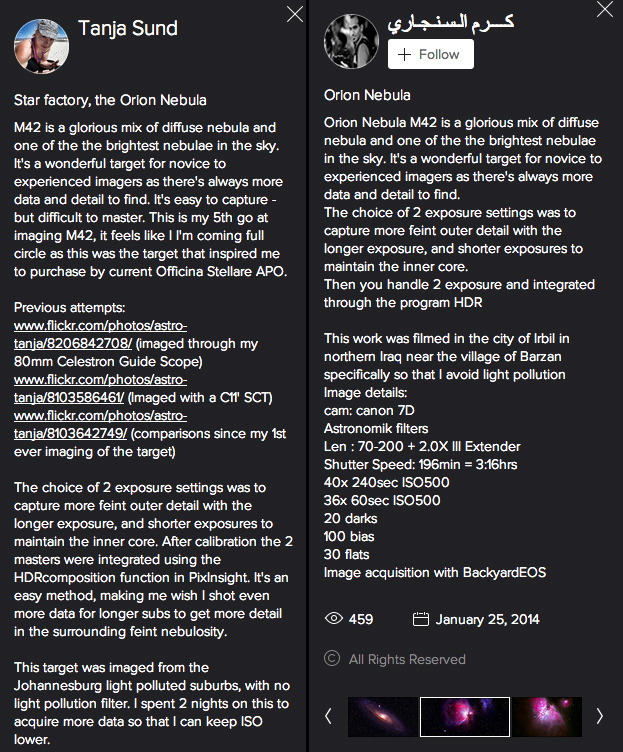 – He’s flipped and cropped my image, removed my watermark and placed his own.
– Remarkable how much detail & quality he was able to get with a Canon 7D, don’t you think?
– He’s stolen my description – again… changed some acquisition data. 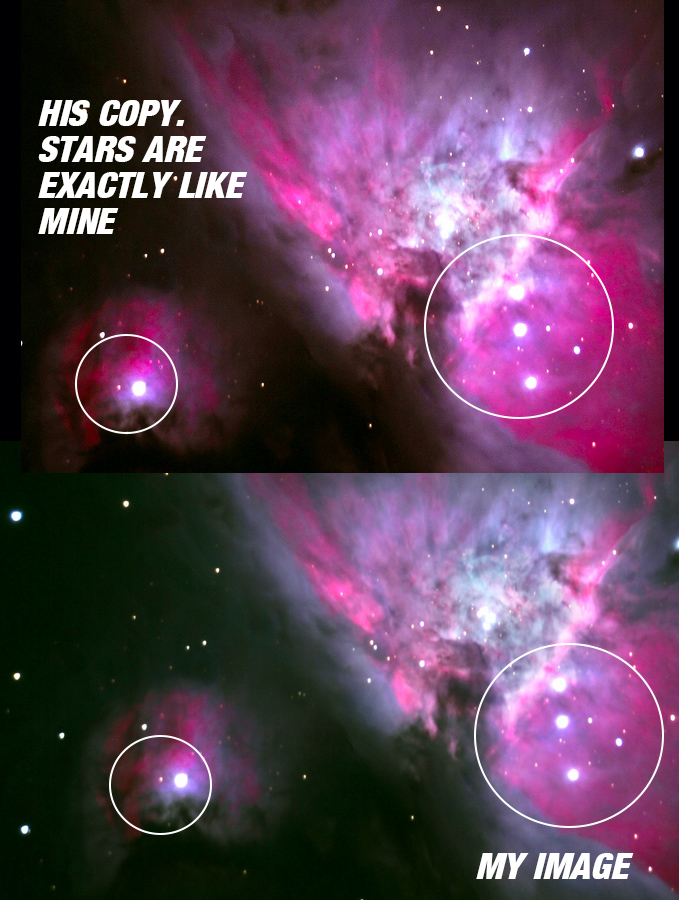 He altered my original – although it’s clear to see the star trails that were evident photographing with my SCT C11 at 2800mm focal length. 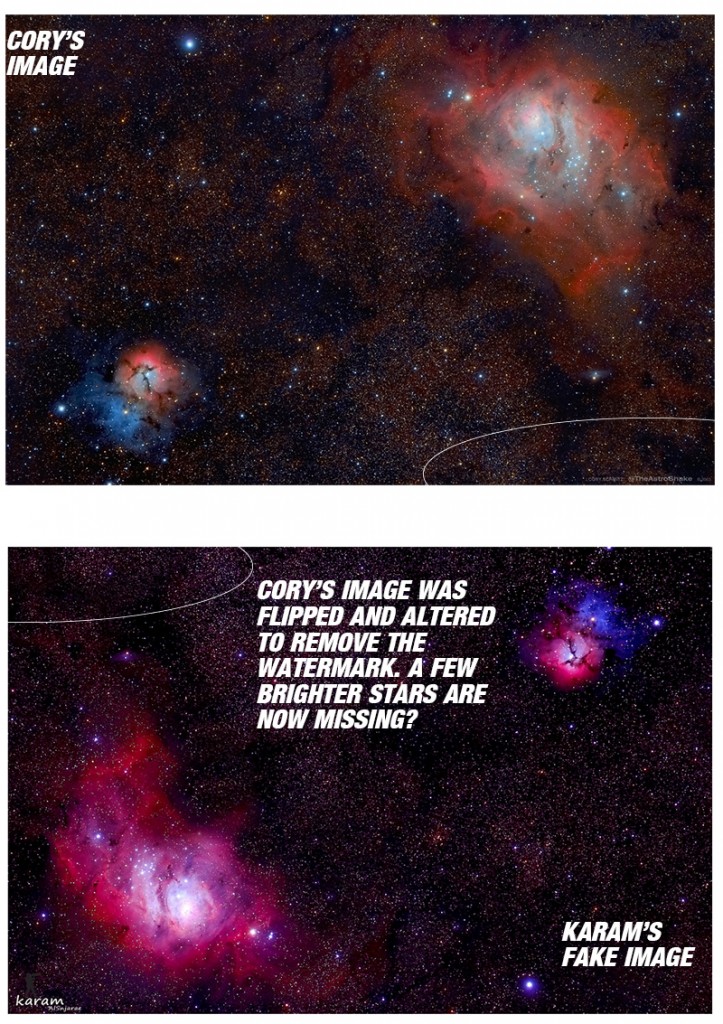 Here’s a screen capture where he’s trying to pass off our images as his. He’ll have no original RAWS for these, we do. We also have multiple supporting pictures that back up other angles of the same shoot.
Do you want some original RAWs for these images…? We have them.

Karam, do you have all the original images of the sequence? I have…. here they are: 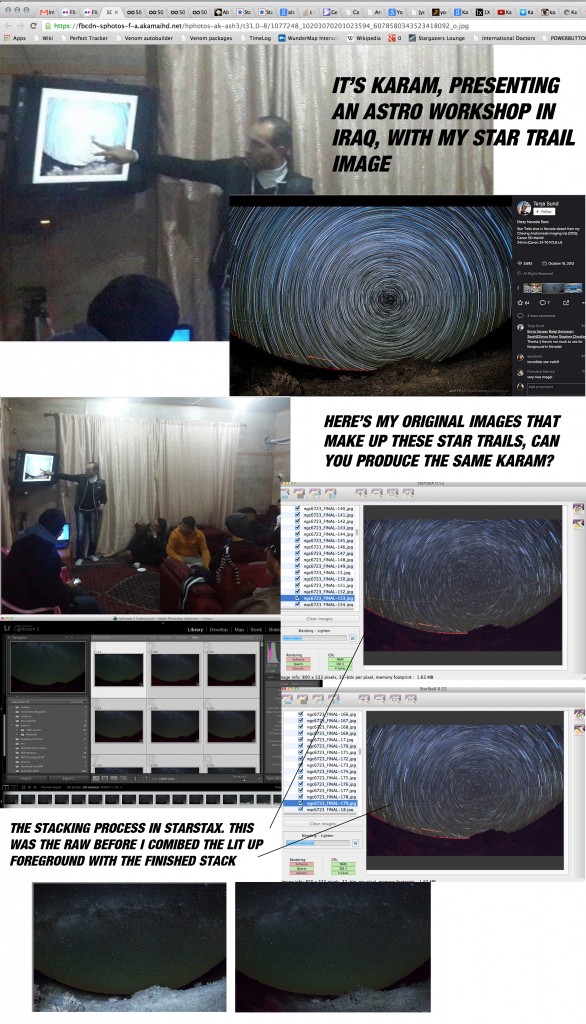 He’s even contacted Cory on Flickr towards the end of last year asking technical questions about my photos. Cory didn’t respond at the time as we were busy – 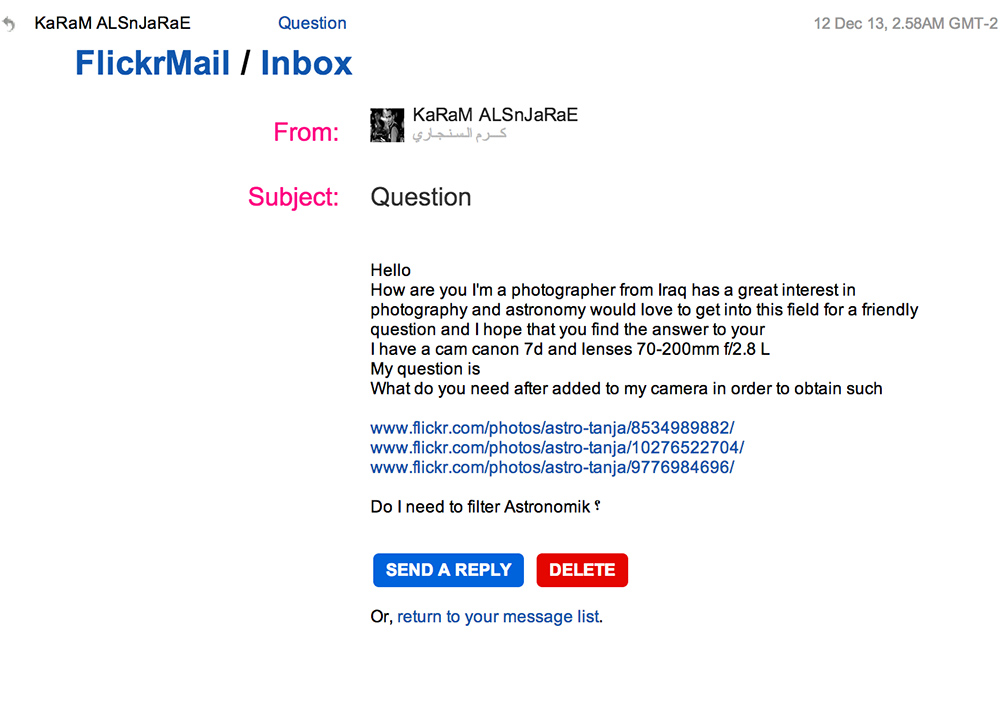 And the evidence goes on and on…

Please leave your comment or question. Feel free to contact me or Cory should you want further information.
tanja@astrotanja.com
cory@astroshake.com

The thievery is despicable. There are more photos in his photo stream that were stolen from other imagers. Check it out, it might even be yours. And now the Internet battle continues. I have no doubt that he will fight back stating we stole them from him. The evidence is here, you decide. We can supply originals and higher resolution images of all our works, he can’t.

We’d appreciate your help in exposing him!

We’re no longer going to waste our time on the matter. Time is better spent doing the things we love and sharing our works freely with the world. He can backpedal and try, waste his time to try rescue his reputation that is now in question.

And importantly – how do we go about protecting intellectual and creative property?

Unfortunately, stuff like this happens all the time. It’s why people and companies have taken to adding huge watermarks to their works that cover the image, then print or sell the images without the watermarks.

I think you’ve taken the correct route with this, however. I know I, for one, have gone to all the accounts that are still open and have flagged him for spam/scam, as should any follower of yours that loves your work and hates to see someone else claiming it as their own. Then, he will have to work really hard to get reinstated on those social media sites, at least with a new name, and start all over, if he deems it worth doing again. Now that he’s been exposed, he should have a very difficult time selling anything of his (whether it’s his own or not) to any publication, digital or print.

Good luck you two! Keep up the awesome work you do! You’ve inspired many people (myself included) and I can’t wait to see what you do next!


It was quiet annoying and disappointing seeing such a shameful act from a fellow photographer and it kills me to say photographer, because clearly he is not related to photography by any means. He stole your work and abused it, he disrespected art and hurt our reputation and the worst of all is that we believed him and we were proud of ‘his’ work. I hope this doesn’t affect us, other Iraqi photographers who are representing their country.
My regards to you and much respect for your work and art. Your picture making is truly unbelievable and quite close to being magical.

Best of wishes and luck for your future work, hoping we wouldn’t face such a trauma again.


i am happy to know the truth. as i saw only one image of a galaxy , told my friends in hospital ,it appears to me that this picture is not from him & hubble telescope will make a complain against him & i repeated that several times in few days than forgot about him . only yesterday a friend told me that he stoled several pictures from others , shame on him .
but proud to know ,who is the real artist . i would like to know about your instruments ,lenses,telescope, camera etc . i would like to do such beautiful pictures like yours. i live in saudi arabia .my best regards.


i would like to know about your instruments ,camera , lenses , telescope for asrtrophotography.i am a beginner & want to do serious & beautiful pictures like your .i felt from the first picture i saw about a galaxy that this picture is stolen & told my frien that hubble telescope will make a complain against him . now i am happy that you made the pictures .thank u a lot


It’s just what ungrateful idiots like that deserve. Even when you pointed out, I understand that he kept on defending something that he cannot defend!

I salute you for doing this! This has once again made me think of re-affirming my copyright control mechanisms so that I can put up evidence just in case my intellectual property rights are violated.

Do publicize this post as far as possible. It”s help keep jokers like these at bay, to an extent. Once again, good you did this!


Sorry, the last comment had a wrong link. I can’t undo posting it.

It’s just what ungrateful idiots like that deserve. Even when you pointed out, I understand that he kept on defending something that he cannot defend!

I salute you for doing this! This has once again made me think of re-affirming my copyright control mechanisms so that I can put up evidence just in case my intellectual property rights are violated.

Do publicize this post as far as possible. It”s help keep jokers like these at bay, to an extent. Once again, good you did this!


Hello! I’m at work browsing your blog from my new iphone 4!
Just wanted to say I love reading your blog and look forward to all your
posts! Carry on the fantastic work!


Even though the damage was done, you did a good job shaming him and he knows it. There has to be a way to display your pics without anyone being able to remove it and I’m sure you’re working on it. Good luck with more awsome pics. Also it was a nice article about Tanya in the Astronomy magazine.


Thanks Bernard. Other than completely branding an image with a watermark I don’t think there’s much else one can do. Plus, i love sharing my images and inspiring others to start looking up more 🙂


A great post (and a terrific set of photos). And, for what it’s worth, I think your approach is exactly correct. As long as there are no safety issues, I say let him fall asleep wherever he wants. These things always work themselves out sooner or later… but it’s often later if there’s a lot of friction involved in getting there.You guys are awesome.